Last night at the Inter-Services Army v RAF match, Director Waleed Khan was presented with an award on behalf of the Club from the Army FA as a thank you for our continued support to the Army FA.

The Award was presented by the Brigadier N M Stokoe OBE, Chairman Army Football, as the Inter-Services match finished 4-1 to the Royal Air Force.

On receiving the award, Waleed Khan said: “A very entertaining game and we would like to extend our thanks for all concerned from both the Army and RAF for putting on a great show. ”

We are grateful of this partnership with the Army FA and hopefully it will continue in the future. 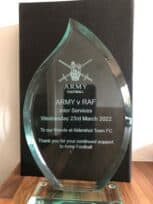 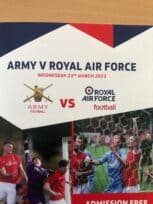