If August had been a pressurised start to the season, with eight matches played, September didn’t look much better as Aldershot Town faced up to four matches on Saturdays, complemented by two midweek fixtures, one at home and one away.

There was still plenty of work to be done as regards wins at home and a continuing of the development of the playing squad and incredibly, replacements for injuries being brought in despite the season still being in its early days, but Danny Searle continued to exude a confidence and belief in his players which went a long way to reassuring and impressing the supporters.

Hoping to start September in the same way as they had ended August, with a win, Aldershot Town welcomed Ian Evatt’s Barrow to the EBB Stadium on 7 September, lying in 19th place in the division. By the end of the game there was a familiar sense of déjà vu as the Shots yet again failed to win in front of their own supporters. Barrow had their opening goal disallowed after exuberant celebrations, but there was no ruling out John Rooney’s free-kick on the stroke of half-time which deflected past Mitch Walker.

The second half saw the Bluebirds move further ahead, a disastrous miss-kick by loanee debutant Max Hunt let Josh Kay in, his goal counting this time after the first half effort had been deemed offside, and the Shots were heading down a familiar path of loss once again. Joy was unconfined when Ethan Chislett provided some hope with a neat tap-in and as the game moved into time added on, the joy increased when the Shots were awarded their first penalty of the season, Alefe Santos being brought down in the box. It was a huge chance for a point but Connor Shields’ low shot was saved and Barrow saw out the last seconds of the game to take the three points and Aldershot Town moved back into the relegation places.

A week later the Shots continued their winning form on the road, defeating Stockport County 2:1, a game they dominated from the start. Two-nil up by half-time after Harrison Panayiotou and Alefe Santos had led from the front, Panayiotou celebrating his return from international duty and Santos firing in from long-range. Panayiotou also hit the post and Chislett had a shot saved, all in the first half, as Aldershot Town ran rampant and although there were no further goals in the second half for Danny Searle’s men, they saw out the game to take home a vital three points. 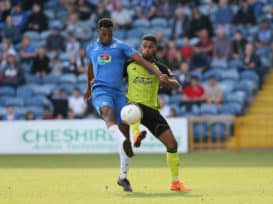 That win up north inspired many Shots supporters to travel to Barnet on the following Tuesday, 17 September but the slight whiff of inconsistency that continued to dog Aldershot Town meant that 200 fans were left disappointed by a 2:0 defeat and although the position of 20th in the table wasn’t impacted, it was a grim evening.

Four days later everything was so very different. On a warm and sunny Saturday afternoon the visitors to the EBB Stadium were Wrexham, a team always much fancied to be in and around the top of the table come season’s end but rarely fulfilling that expectation. Just above the Shots in the league table, a win for either side would move them away from the other as well as up the table and the game reflected the tightness between the two sides. Christian Dibble saved well from Chislett in the first half and Walker in the Shots goal used a powerful punch to clear Akil Wight’s header in front of the East Bank. The second half also remained goalless and as the match moved into time added on there was a general expectation of home fans being unable to witness a home win once again. However, in 90+4 this all changed as Panayiotou slid a neat cross from Chislett underneath Dibble. 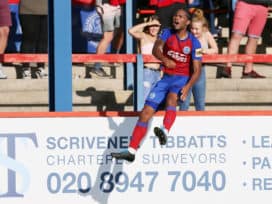 Panayiotou scores in the 94 min

His celebrations, coupled with those of the home fans, were a sight to behold. A home win for Danny Searle and his team of fighters – the mutual applause after the game was thoroughly enjoyable for everyone. 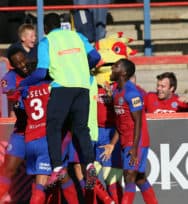 Sadly, as had so often happened already this season, the chance to back this up with another home win was dashed three days later when favourites for automatic promotion and members of the EFL until just a few months previously, Yeovil Town came calling. After the game many supporters said that they felt that the football played by the Glovers was some of the best they had seen for a long time at the EBB. Darren Sarll’s team, enhanced by close season Shots target Rhys Murphy, were ahead after eight minutes, the goal scored by former Shots player Johnson Hippolyte’s nephew, Myles, but centre back Max Hunt levelled the game with a towering header five minutes later. There was excellent play by Yeovil for the second goal, a fine team move finished by a curling shot from Jimmy Smith and the game was sadly over on the hour when Murphy moved the score to 3:1.

Still the players and management took the time to come and applaud the supporters after the match, as well as appearing in the EBB Lounge, and the mood that Searle was building around the club continued to grow. This was important as the final game of the month saw another defeat, this time away to Chesterfield. It was a game in which the Shots played superbly well and it was a total mystery to everyone, including opposition manager John Sheridan, just how Chesterfield came away with the win. Indeed, Aldershot Town went ahead in the 11th minute through Chislett. They were pegged back by Scott Bowden’s equaliser half an hour later though and matters were all square at half-time.

Just five minutes into the second half there was an opportunity for the Shots to take the lead with their second penalty of the season. Sadly, this one, awarded after Shamir Mullings was brought down in the box, went the same way of the first – Panayiotou sending the ball soaring over the bar. And it was an unfortunately timed miss, the home side moving into the lead five minutes later, Liam Mandeville with what turned out to be the Spirerites’ winning goal. Panayiotou netted in the 75th minute but it was called offside, and he and Mullings had further opportunities to snatch a point for Searle’s team, albeit with neither successful.

It was a disappointing end to a well-played match and to the month as well, with Aldershot Town moving back into the bottom four after spending the majority of the month away from the relegation places. However, there were plenty of good signs of the team beginning to really come together, enhanced by loan signings of Hunt and Jack Powell and in many of the performances, particularly the games at Stockport and with Wrexham.

There was still plenty of football to come, plenty of matches to play – the Shots supporters could
continue to look forward into the season with optimism…