The third month of the 2019-20 season started with Aldershot Town lying in 21st place in the table. The team was beginning to look settled and there was good news for the supporters with the playing squad, too. Max Hunt, the young central defender on a month-long loan from Derby extended his time with the Shots until early January, a popular decision with the fans who liked what they saw of the 20-year-old. And Danny Searle, looking to increase his strike options up front, brought in Mohammed Bettamer after he left fellow National League side, Barnet. Bettamer and Searle had previously been together at Braintree and there were high hopes for the new number 19 at his new club.

Despite lacking in match fitness, Bettamer was on the bench for the opening game of October, a 0:0 draw away at Chorley. It was the first match that the Shots had failed to score in since their game with Bettamer’s former club, Barnet, nearly three weeks earlier, but Hunt, now well established in the centre of the Aldershot Town defence, played his part in the clean sheet and the gaining of a vital away point. But five days later the red and blue scoring machine burst into life once again. 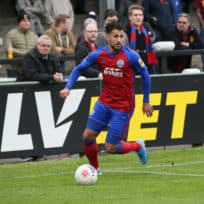 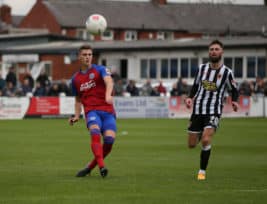 The visitors to the EBB Stadium, Dover Athletic, goalkeeper Mitch Walker’s former club and a team that the Shots had had many a feisty battle with over the years. With the Shots’ variable form and place in the bottom four, added to the fact that Dover were outside the play-offs purely on goal difference and hadn’t lost away from home so far all season, expectations were not high and it was therefore a great shame as fewer than 1,200 home supporters saw the best performance of the season so far, a 4:0 routing of the Whites. There was delight as Shamir Mullings notched his first goal of the season after 25 minutes, the home fans as keen as the former Forest Green Rovers man was for him to open his account for the Shots and it was followed by a sublime strike from Jacob Berkeley-Agyepong after good play from Alefe Santos. Berkeley-Agyepong curled the ball beautifully past Lee Worgan and the Shots were 2:0 up just after the half hour.

The good news kept coming in the second half as well, with Aldershot Town doubling their score and Dover having no answer to the Shots’ irresistible football. Jack Powell, who had arrived on loan from Crawley Town in mid-September, drilled a daisy-cutter free-kick past Worgan eight minutes into the second half to put his new club three goals to the good and eight minutes later Santos completed the rout, when he ran through in a one-on-one situation and stroked the ball home for his second of the season and a triumphant fourth for Aldershot Town. There were no further goals and very little attempt from Dover apart from keeping the score from a further increase although Dean Rance was unlucky not to score a fifth in the dying minutes, Worgan this time well up to the challenge. No matter, the Shots were out of the bottom four and up to 18th place. 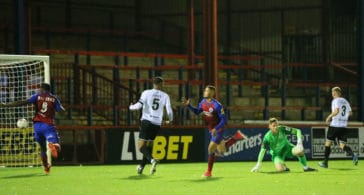 It was a great evening for both players and supporters and it was therefore a great shame when just four
days later, in front of a 2,766 crowd, boosted by a Pay-What-You-Want scheme, the Shots slumped to a
3:0 defeat to Hartlepool United. In just the fourth minute arms went up all over the Pools’ 18-yard box as
Shots players tried to claim a penalty but the referee was unconvinced and seconds later the home side
were a goal down, as Josh Hawke converted at the High Street End after a swift breakaway. Searle’s
men though rallied and optimism was growing when Walker saved a penalty from Hawkes after Lewis
Kinsella was judged to have fouled in the box. It was fair to say that he’d had plenty of practice, having
already faced four in the season and it meant the Shots went in just a single goal behind. The second
half though saw Aldershot Town unable to break down a determined Hartlepool side and in the 80th minute Gavan Holahan put his side 2:0 up, benefitting from good build-up play from Luke James and former Shots loanee, Nicke Kabamba. In added time Kabamba really put the metaphoric boot in, scoring Pools’ third and leaving a disconsolate feeling around the EBB Stadium.

Never mind, the following week saw a move away from the National League as the fourth qualifying
round of the FA Cup beckoned. It was a tough tie, away to Bromley and as it turned out, despite the
Shots scoring three goals, still ended with Aldershot Town failing to have a ball with their name on it for
the first round proper. It was game where the Shots were never either ahead or even on level pegging,
going first one then two goals down, Bettamer then scoring his first for the club before Bromley captain
Jack Holland scored the Ravens’ third.

The Shots never stopped fighting and were rewarded when Mullings moved the score to just a one-goal
difference but Michael Cheek then scored his second of the game when the Shots defence failed to clear
and although Robbie Tinkler of all people got his team mates back to 4:3 with ten minutes to go, causing
some gentle panic in the Bromley support, the game was seen out well by Holland and his team mates in
the same manner as it had been when the two teams had met two months previously.
It was back to National League action a week later as Aldershot Town travelled up to a cold Harrogate Town ground and a match on their plastic pitch. There were long periods when they matched their high- flying and spending opponents well – the position in the play-offs and the recent signing of former

Premier League striker Jon Stead clear indicators of Harrogate’s advantages – but in the end the
resolute Shots were undone by a Jack Emmett goal as the game moved into time added on. It was a
crushing blow for the players and the vocal travelling supporters who once again appreciated the
understandably somewhat muted applause offered to them by both players and management.

And so to the final game of the month, yet another Tuesday evening fixture, the sixth of the season and the Shots were on the road again, this time a considerably shorter journey to Boreham Wood. The Wood had been on the wrong end of a 2:0 result at home three days earlier, against a dangerously drifting AFC Fylde and with the Shots also trying to shore up their defence and keep the game tight, it was probably unsurprising that the game ended in the same result that the Shots had started the month with, a goalless draw. In fact, with a team that contained the two highest goalscorers in the division at that point, former Shots loanee Kabongo Tshimanga and Tyrone Marsh, keeping a clean sheet was a deeply positive result for Searle and his men. And the point gained kept them safely in 20th position, maybe only just but most definitely outside of the relegation places.

It had been a tough month, battering in some places with occasional bright moments to treasure, such as
the home win against Dover Athletic. And despite being the team everyone had picked to fill the bottom
place in the table, the Shots were continuing to confound that expectation. There was still plenty of hope
for an increase in form as they moved into November, still with plenty of football to play and the FA
Trophy to look forward to…