Aldershot Town started the fourth month of the season in 20th place. Consistent form was still a little difficult to come by, but with the two loanees, Max Hunt and Jack Powell now settled in to defence and midfield respectively and Mo Bettamer picking up match fitness with every game he played, the team was beginning to look far more of a cohesive unit, which coupled with Danny Searle, Anwar Uddin and Dave Blackmore’s coaching and encouragement, continued to inspire belief throughout the squad and the fanbase. Sadly Ollie O’Dwyer who had joined at the start of the season and been injured in Shots’ first National League game, left the Club on the opening day of the month for personal reasons. It was disappointing for the player and the Club who had been hopeful of the young player’s progress when watching him in pre-season.

For the team though, the month could not have started better, with a 2:0 win over Alan Devonshire’s Maidenhead United. It was a surprisingly easy victory too, bearing in mind that previous matches against the Magpies had usually ended in draws, defeats or tight wins. Everything worked for Aldershot Town on this Saturday afternoon, the goals coming from the substitutes’ bench in the second half. This was not to suggest that they had not had opportunities in the first 45 minutes – Ethan Chislett and Alefe Santos both had long-range chances, Shamir Mullings missed out twice and even right back Robbie Tinkler came close when his cross grazed the crossbar. Mitch Walker worked hard at the other end to keep the Shots’ goal empty, saving from Danny Whitehall and Kodi Lyons-Foster headed off the line minutes later, ensuring Searle’s men had a good base to work from in the second half.

Panayiotou came on early in that second half for a tiring Bettamer and although his first chance saw him
struggle, with the ball tangling in his feet, in the 63rd minute he made no mistake, Powell’s free-kick bouncing out of the keeper’s arms and the St Kitts and Nevis player tucking the ball home. He was to have a further chance later in the game as did Chislett but it was the irrepressible Whittingham who was to put the gloss on the win; having come on for Dean Rance, he ran through on goal in time added on and celebrated his first goal in red and blue, with the East Bank. 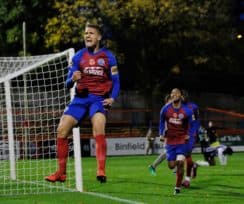 It was a shame that after this fine win, Aldershot Town found themselves without a game for two weeks, due to not having qualified for the first round of the FA Cup. It might have been thought that a week off would have been beneficial but as it turned out it was anything but – a trip to Dagenham and Redbridge on 16 November turning out disastrous as the Shots lost 6:1. The fallout post-match threatened to destroy everything that the team and management had worked hard on over the previous four months but it also was to provide something of a catalyst. Strong words were said in the days after between players and from management to the squad and afterwards it was seen that this was the game which really provided a huge push forward.

A week later the visitors to the EBB Stadium were Notts County. Everything about this game pointed towards a further defeat – County were recently relegated from the EFL and had new owners who had pumped important funding into the club and a manager keen to prove himself at this level, former AFC Wimbledon boss, Neil Ardley. They were also now building momentum after a slow start to the season, just two points off the play-offs although like the Shots, they had also suffered a big defeat the previous week – going down 3:0 at home to Barrow. So both teams were looking for a performance to get themselves back on track and it was to be the Shots who were to eventually claim the three points.

Searle made four changes to the team that had been humiliated seven days earlier, bringing back Connor Shields, Bettamer and a returning-from-suspension Lewis Kinsella. In front of the biggest home crowd of the season, nearly 1,900 of them Shots fans, all the goals were scored in the first half. A competitive initial half hour saw no dent of the scoreboard with the remaining 15 minutes of that half seeing all the scoring action. Mo Bettamer delighted the home support with his first league goal of the season. Powell, who was having more and more of an effect on Shots’ performances saw a blocked shot of Shields’ delivered from the right by the Crawley loanee meeting Bettamer’s head and he directed the ball into the top right corner. 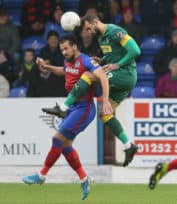 Celebrations abounded but were muted ten minutes later when Kyle Wootton slipped the ball under Walker to flatten the match in front of the East Bank. There may have only been eight minutes of the half remaining but it was enough for an inspired Aldershot Town to take the lead once again, this time through Whittingham, scoring his second home goal in as many games – the home fans were jubilant!

It was a long second half in many ways as the Shots sought to hold on to their lead. County were unlucky not to equalise early on after a sloppy scramble in the home penalty box, but the ball was finally cleared. Wootton and Thomas both had chances for the visitors and Bettamer nearly became a two-goal hero when his looping header almost put the Shots 3:1 up. The final minutes and time-added-on were truly tense for the Shots faithful but their team saw it out like pros, with plenty of ball shielding and holding around the corner flag, well away from Walker and the Notts County forward line. There was delight around the whole ground when the final whistle blew – it had been a hugely accomplished and professional performance and the Shots were now up to 18th place, with a trip to Yeovil Town in three days’ time.

Just two months earlier Darren Sarll’s men had ripped through Aldershot Town at the EBB Stadium and looked odds on for an immediate return to the EFL. In the intervening period though Searle’s team had learned a lot and made strong progress and there were times at Huish Park when it looked as though the Shots would come away with all three points. A penalty from Chislett put Aldershot Town ahead in the first half – the first one scored by the Shots in the season after three previous spot kicks had been missed but the game was equal by half-time, from a swivelling shot by Albi Skendi.

The lead was regained by the visitors in the second half when Powell hit a 30-yard shot from a laid-off free-kick, the bend and force completely fooling Nelson in the Yeovil goal. With the momentum now going all Aldershot’s way and the travelling supporters sensing a famous victory on the road, two events then changed the flow of the match. First, Alfy Whittingham was booked for simulation when it seemed a further penalty should have been awarded and then Yeovil were awarded a spot-kick, despite manager Searle’s protests that Bettamer had played the ball, not the man. The successful conversion was by previous Shots target, Rhys Murphy and meant that the game ended all-square. It was though a good point to gain and kept Aldershot Town clear of the bottom four, although now back down to 19th place, and the supporters were fairly happy as they made their way home back up the A303. 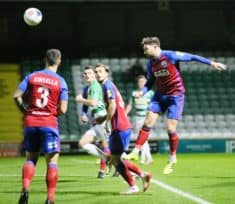 And so to the final match of November and it was back to the EBB for the second successive Saturday, this time the visitors being Chesterfield. Two months earlier Aldershot Town had played well and come away with nothing from their visit to Derbyshire but things had not gone well for the Spireites in the interim. They were two places and four points behind the Shots and for a long time in this game it looked as though they would leave the EBB Stadium empty-handed. On the stroke of half-time Ethan Chislett scored his second penalty of the week after Bettamer was tripped when he was in on goal – it was a fine conversion, high into the left side of the goal and matters were well set-up for the second half.

Just five minutes into that second half Chesterfield were level, a header from Scott Boden beating Walker. But there was huge delight when Powell took his team mates into the lead once again after good work from Alefe Santos and Chislett saw him caress the ball home in front of the East Bank. Lewis Kinsella cleared off the line from a penalty box scramble and with every passing minute it looked as though the Shots were going to win by two goals to one in consecutive weeks. The bubble was burst in time-added-on though when attempts to run down the clock in the same manner as the match against Notts County were scuppered in the 94th minute, Tom Denton rising highest to a corner at the High
Street End and scoring a late, late equaliser.

The excitement around the ground died away like water disappearing down a drain and the Shots had to settle for just a point, it probably benefiting them more than their visitors who remained in the relegation places. The post-match celebrations though were understandably subdued.

However, all in all it had been a good month. Five games played, two wins, two draws and just one defeat. Things were definitely looking up, with form being gained at the right time, just before the all-important run of games at Christmas. Danny Searle was making his mark on football in Aldershot now and the fans were well strapped in for the ride…