With a win and a draw to end 2019, Aldershot Town started 2020 lying in 19th position in the table, with eight wins, seven draws, 12 losses and 31 points on the board. The wins were becoming more regular with the ever-increasing stability of the team and squad although, there was concern amongst the fanbase that high-performing loanees Max Hunt and Jack Powell would be recalled to their parent clubs. For the time being though, both players remained with Aldershot Town.

The first of January saw the arrival of Eastleigh at the EBB Stadium. Considered to be a ‘bogey’ side for Aldershot Town, who in the previous six seasons they had been back in non-league football had failed to take so much as a point from the Spitfires whenever they visited, there was also the issue of the returning former player, in Scott Rendell. Certainly Rendell had always shown great relish in scoring against his previous club, Woking, when he was with the Shots. Was he going to do that now to his former colleagues and supporters? Having not been a particularly regular starter since his move across Hampshire, it was quite a surprise to see Rendell’s name in the first eleven but perhaps Spitfires’ manager Ben Strevens was also a believer in the ‘return of the former player’ and was hoping for a positive effect from the number nine.

As it was, the only positive effect in the first half came from Ethan Chislett who after his hugely disappointing last-minute miss against Barnet three days’ earlier, now came to the fore in a magnificent way. Right from the start of the game the Shots were on top, with Eastleigh looking somewhat jaded. Mo Bettamer blasted over the bar and Dean Rance chanced a long-range hit too but it was Chislett who woke the crowd up with an individual goal after 32 minutes – he picked the ball up on the edge of the penalty box, moved with ease through two Eastleigh defenders and shot the ball past Max Stryjek before the keeper had time to react. A 1:0 lead for the Shots at home at half-time, against Eastleigh – it was unprecedented! 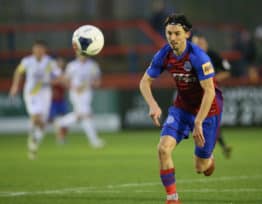 The good times continued in the second half and it was Chislett who doubled the lead, although only after chaotic scenes in the Aldershot box from a Jack Payne corner nearly led to an equaliser for Eastleigh. But a throw-in from Tinkler on the hour, picked up by Hunt led to the Derby loanee crossing the ball to a lurking Chislett who lost his marker and headed the ball home. There was huge delight from the home supporters, although the game still had half an hour to go. Eastleigh took a foothold in the match in the 68th minute when Tyrone Barnett scored from a header but their joy was extremely shortlived because this was Shots’ day and Craig Tanner doubled his tally for his new club with Aldershot’s third just two minutes later.

And that was how it stayed, Searle’s men seeing the game out in style and the supporters leaving the ground in high spirits at such a fine result. Just 24-hours later though there was a huge sadness across the fan base as news broke of the passing of former player and caretaker manager, Chris Barker. The two contrasts of football sat starkly beside one another, with the happiness of a win being dwarfed by this tragic occurrence. Barker and his work for Aldershot Town would never be forgotten.

Three days later though the work went on and the Shots were on the road for the first time since 14 December, travelling to Wales to face Wrexham. It was another season when the proud north Wales club was not meeting the high expectations of its supporters and Aldershot Town were to take advantage of this, going on to register back-to-back wins for the first time in the season.

In the 20th minute Dragons’ keeper Rob Bainton saved a powerful Bettamer shot with his face but after lengthy treatment was able to continue and saved well from Bettamer, Tanner and twice from Jack Powell to frustrate the visitors who were mostly on top in the first 45 minutes. 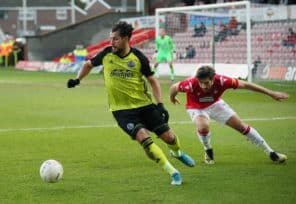 The Shots continued in this vein of form in the second half, finally taking the lead through in-form Chislett who bent the ball past the valiant Bainton and into the top right-hand corner of the goal. Six minutes later Bettamer doubled the lead, heading home from a Jack Powell corner and the Shots thought they had a third when Harrison Panayiotou netted – the linesman called play back though, due to an offside.

There was tension as the game moved into time added on because JJ Hooper pulled the score back to 2:1 but as they had done before, the Shots saw the game out professionally and sent 164 supporters home happy.

And it was back to home the following Saturday at the EBB, the visitors bottom of the division Chorley, whose first season in National League was not going well. Nevertheless, they held Aldershot Town to a draw, in a game where the six goals were divided equally and where two points were lost with almost the final kick of the game.

There were some changes to the Shots side as Jack Powell had been recalled to Crawley while Max
Hunt had also returned to his parent club, only to immediately be sold on to Carlisle United, and changes
had to be made in the starting line-up, Alex Finney in place of Hunt and James Rowe for Powell. The first half saw the Magpies take the lead twice, in the ninth and 25th minutes, but both of these strikes were cancelled out by goals from Craig Tanner and Mo Bettamer who were developing a real understanding of each other’s play on the field. 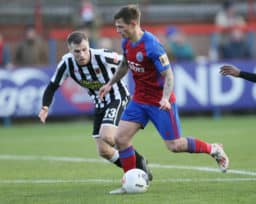 But disaster struck in the 91st minute when Robbie Tinkler was adjudged to have handled in the Shots penalty box. He was sent off for this foul and the Shots were then doubly punished as Alex Newby beat Mitch Walker with his penalty kick – the joyous mood drained away around the ground apart from the 32 wildly celebrating travelling Chorley fans in the High Street End Stand. Despite all this, the players still made their now customary trip around the ground applauding the supporters and another point was added to the total.

The good mood and feeling engendered by the past four weeks was rather blown away on the last Saturday of the month when the Shots arrived in Kent to play Dover. Results had always been somewhat mixed against the coastal team and the fact that they were looking for a reaction to the 4:0 defeat they had suffered at the EBB two months earlier led to a 2:0 defeat for the Shots who struggled to get into the game and had Kodi Lyons-Foster sent off in the 69th minute. The damage was done by then though, goals from Kevin Lokko in the first half and Shadrach Ogie in the second condemning Searle’s team to
their first defeat in six matches.

There was an immediate opportunity to return to better form as the Shots were ending the month as they started it, with a game against Eastleigh, this time the match postponed from Boxing Day. It was a challenge just getting to the ground as a broken down train caused all sorts of delays in travel but once everyone had finally made it, the Shots put on a fine defensive display to keep a clean sheet and bring home a point. Danny Searle made four changes including giving a debut to Jean-Yves Koue Niate who had signed from Torquay the day before.

The Spitfires were on the back of a four-game losing streak and were determined to break this which mean that opportunities for the Aldershot Town strike force were few and far between, Mo Bettamer having the best opportunity to grab the points for the Shots right at the death – his shot was a little weak and Stryjek palmed it out of danger and Aldershot Town had to be content with the clean sheet and the point. It was also a continuation of their good form when visiting Eastleigh – a Shots team hadn’t lost there since 2015.

So in the end, it hadn’t been a bad month – two wins, two draws, only one defeat, the first back to back wins for Searle and his management team and eight points from five games. With that kind of return the Shots were certainly going to see themselves at least in mid-table come the end of April – and there was still three months of football to come…