Aldershot Town moved into February still in the lower reaches of the table but still with that determination and team ethic to do well at all times, led by now well-established boss Danny Searle and his coaching team. There had been some entertaining football over the months and now everyone was looking forward to a run-in which would hopefully see the team safe by the end of March, thus leaving a month for the players to really express themselves in the final four weeks of the season. How things can change in just a few short months…

A hard-earned point at Eastleigh, along with a clean sheet four days’ earlier set the players and supporters up for an exciting home clash with high-flying Harrogate Town on the first day of the month. Lying in second place on 55 points, Town were aiming for the play-offs in this, their second season in the National League, and had taken all three points from the Shots the previous October with a last-minute goal. This time the Shots scored first, the Mo Bettamer/Craig Tanner combo continuing from the previous month as Tanner played in the Aldershot Town number 19 for a low shot from 16 yards out. The goal was on the stroke of half-time and gave Simon Weaver, the Harrogate boss, the opportunity to lift his men over the interval. And certainly there was further pressure from the visitors in the second half. Two minutes in Mitch Walker made a fine save from Jack Muldoon and Will Smith’s header was cleared off the line by a determined Shots defence. And although Harrogate did finally equalise in the 70th minute, Walker having no chance with Lloyd Kerry’s shot, it was the home side who saw the game out well with further opportunities from Bettamer, the best of which was deflected in a goal mouth scramble. But a point was seen as a good result against such a strong side and the applause was warm around the stadium at the end.

There was less warm applause a week later when the Shots travelled north to Hartlepool. Previous seasons had seen good results in the north-east but this time everything fell apart. Pools were 1:0 up in six minutes and doubled that lead through Mark Shelton in the 20th and despite the Shots’ best efforts, it was to turn out to be a bad day at the office for everyone with even such reliable players as Tanner and Bettamer failing to make an impression on goal, although captain Dean Rance did have a shot cleared off the line late on in the game. Results around them meant that there was no alteration in Aldershot’s position in the table but work was required going forward.

And there was time for players and management to carry out that work as the Shots then didn’t have a game for a fortnight, courtesy of the EBB Stadium pitch failing an inspection on the morning of 15 February, so the next match was away to Maidenhead United on 22 February. The previous two visits to York Road had seen one loss and one draw – it appeared that Alan Devonshire’s teams were tough to beat – but on a day when everything went well for Aldershot Town and 500-plus travelling supporters, Aldershot Town were to be triumphant. Leading from the front, Dean Rance put his team 1:0 up after eight minutes, after which there was a break in play while the goal net was retied, Rance’s shot proving too powerful for the mesh! This short pause didn’t impact on Shots’ impetus and on the 21st minute the lead was doubled, Harrison Panayiotou set up by Lewis Walker and lashing the ball home to send the travelling support into massive celebrations. Indeed, their team continued to control the rest of the half although matters were slightly marred by Lewis Kinsella receiving an injury and having to go off. To deal with this, Searle changed formation to a 3, 5, 2 and the Shots continued to dominate. 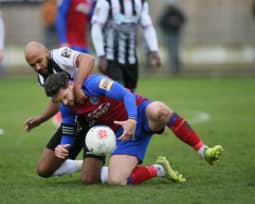 The second half saw a more positive Maidenhead side, no doubt boosted by their half-time encounter with their manager although it still took them twenty minutes to get a goal back and after that, never really showed much sign of retrieving anything from the game. Panayiotou, Tanner and new signing Gyliano Van Velzen all had opportunities to put the game out of reach and keeper Mitch Walker got involved at the death when Maidenhead were awarded a free-kick – 500 Shots supporters held their breath as the ball was curled in by Danny Whitehall and saved by the Aldershot number one to preserve the vital three points. The celebrations between supporters and players went on for several minutes after the game, although it was not ideal seeing Lewis Kinsella now on crutches. Kins wasn’t to kick another ball in anger for the rest of the campaign.

If the game at Maidenhead had been seen as a strong performance, it was nothing compared to the rearranged game three days later, the postponed match against Boreham Wood. Wood were another side chasing for the play-offs and like the Shots, had an ambitious manager, in Luke Garrard. Lying third in the table after a 1:0 win at the weekend over fellow play-off chasers, Yeovil Town and coupled with Nathan Ashmore between the sticks for Wood, a keeper who always saved his best football when he visited the EBB, on paper this match looked to be challenging for the home side at the very least. And after 13 minutes it looked even harder when Kane Smith put the visitors into the lead, a situation which remained until half-time.

The second half was one that would live with the home fans for a long time as some of the best football to be seen at the EBB Stadium that season was played. Incredibly the Shots drew first level and then ahead and through the unlikeliest of players as Kodi Lyons-Foster, playing centre back to cover for Alex Finney who had moved to left back to replace the injured Kinsella, scored a brace of goals in a quarter of an hour spell. The first came from a corner, Craig Tanner floating the ball over and Lyons-Foster rushing in to head home at the back post. Once bitten, twice shy one might imagine for the Wood defence but incredibly the same thing happened again 15 minutes later; another Tanner corner and there was Lyons-Foster with his second goal of the game, again at the far post and this time putting his team into the lead. 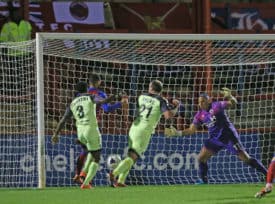 If the celebrations were great for that goal, they were considerably multiplied three minutes later as Jacob Berkeley-Agyepong, revived after injury by his loan spell with Dartford, fired in a goal of great ability and skill which sent the home fans wild with joy. There was a touch of the returning player with four minutes to go, when former Shots loanee Adam May pulled one back for the visitors but as they had showed they could do before, the Shots saw the game out well and revelled in the delight from the home supporters at the final whistle. Back to back wins which now saw Aldershot Town in 14th place and nearly at the 50-point marker and safety. 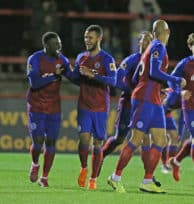 It was a pity that the match the following Saturday had been postponed, due to hosts Notts County competing in the FA Trophy and maybe a little of the momentum was lost for Searle’s men as they moved into March. The next match was ten days later and although it was at home, Dagenham and Redbridge the visitors, there didn’t seem to be the same air of positivity on the pitch. To be fair, the Shots were missing Kinsella, Bettamer and Tinkler, all of whom were injured and it was a much adjusted side that took the field. There was a hope that the 6:1 defeat which had been Aldershot’s lot when they travelled to east London back in November might be avenged but in a game where no side seemed able to make a breakthrough, Mitch Brundle broke Shots’ hearts in the 86th minutes and it was a solitary goal which saw all three points lost at home. It was hugely disappointing after the previous two matches and although not known at the time, what was to be the Shots’ final home game of the season.

Because the bad news was building now, not just locally or nationally but around the world as Covid-19 began to increase its dominance in the news. Aldershot Town travelled up to Notts County on 10 March
to face yet another side chasing the play-offs and were soundly beaten – disappointing, as they had
taken an early lead through Craig Tanner but the pressure from Neil Ardley’s players was too intense.
County equalised ten minutes before half-time and the second half was to see them overtake the Shots
with a goal on the hour from Kristian Dennis and then capitalise on their dominance with a third, eight
minutes later. Searle’s men had chances early in the half through Chislett and Tanner but with these not
taken, it was to be a bad night for Aldershot Town.

The following Saturday saw the players on the road again as incredibly, despite match after match being
postponed due to potential contact of staff and players at several other clubs, with Covid-19, the Shots’
match with AFC Fylde carried on. In what was to be the final match of the season, although unknown at
the time, and played in an air of anxiety, Aldershot Town lost 1:0 to a goal which came early in the
match. Berkeley-Agyepong was judged to have committed a foul in the penalty box and although Mitch
Walker saved well from the initial kick, Danny Philliskirk followed up on his original shot and fired the ball
home. It was the only goal of the game and saw Fylde hopeful of a run towards the end of the season
which might keep them up in the National League.

However, it was not to be for Jim Bentley and his players. Two days later the National League was suspended and a week later the whole country was plunged into a lockdown, the likes which had never been seen before in the UK. There was no way that the football could continue and eventually the season was ended on a points-per-game basis, leading to Aldershot Town finishing in 18th place on 46 points, having played 39 games, and AFC Fylde being relegated. It was a horrible way for any kind of competitive sport to end but it did mean one key thing – Danny Searle, in his first full season as a manager and as Aldershot Town boss had achieved what the bookies had deemed almost impossible – he had kept the Shots in the National League, and although nobody knew quite when football might start again, it was a huge well done to a team who were favourites to go down at the start of the campaign…