After a strong end to November’s matches, Aldershot Town started December in 19th place in the table, with 27 points. The players were definitely fitting together well now as a group and the big emphasis was all about consistency – getting those back to back wins and draws which would see the team progress up the table – along with gaining more clean sheets and goals, both of which would definitely contribute to upward movement. Although traditionally a busy month for games, December 2019 saw the Shots play only four games and as it panned out, the second half of the month was considerably better than the first half.

It was unfortunate that the opening match was also the longest away trip of the season, the five-and-a-half hour 300 plus-mile trip to table-topping Barrow. Ian Evatt’s men were in fine form but they were to have a tough time against a determined Shots side. Indeed, the visitors had an excellent case for a penalty early on in the game when loanee Lewis Walker was felled in the box, but referee Joe Johnson was having nothing to do with it. And that could have been significant, when on 22 minutes, Barrow went ahead, John Rooney’s powerful shot deflecting off Dior Angus past the unfortunate Mitch Walker. It was a particular shame for the former Dover man as he had saved spectacularly from Rooney just moments before.

Barrow continued to have a variety of chances throughout the game with Rooney continuing to be a threat throughout, and Scott Quigley firing wastefully over the bar. Joel Dixon kept the Bluebirds in the ascendancy in the second half, saving from Lewis Walker when the young forward burst through with only the keeper to beat and also from Shots defender Robbie Tinker who sent in a fine header. All to no avail though, and despite Mitch Walker making a fine save from the feet of substitute Hindle in the dying minutes the Aldershot Town players and travelling fans had to face up to another game where they had played well but come away with nothing.

Two days later there was exciting transfer news as former Reading and Motherwell forward Craig Tanner
signed with the club on a deal which ran to the end of the season. The 25-year-old, who lived locally, had been out of the game with a long-term injury and was looking for opportunities to get back playing again. It looked to be a fine deal for both parties. His first game came just five days later, an FA Trophy and despite Tanner’s clear delight at finally being able to play professional football again, it turned out to be a disastrous day for Aldershot Town who failed for the sixth consecutive season to reach the second round of the non-league’s premier cup competition.

Not since Andy Scott’s reign in the 2013-14 campaign had any progress been made in the FA Trophy and there certainly wasn’t going to be any this year either as the Shots went down 5-1 in the West Country to fellow National League side Torquay United, the sole Aldershot goal coming from Mo Bettamer. It definitely wasn’t worth sending a postcard home from this seaside resort to tell everyone at home how well the day had gone…

However, just as had happened before, when the players had succumbed to a heavy defeat, the 6:1 battering at Dagenham and Redbridge, spirits were immediately raised by the management team, a proper inquest carried out and ways forward discussed to ensure that the supporters were immediately brought back on board with better football and performances and that the players understood exactly what was expected of them.

The result was a home win against Stockport, four days before Christmas and an excitement around the EBB Stadium once again. It was the Shots’ first ‘double’ of the season, having previously defeated the Hatters in mid-September and the goals came from two of the new boys, Craig Tanner and Mo Bettamer, who was beginning to make Shots fans wonder as to why Barnet had ever released him – although at the same time being delighted that he had been! Tanner scored just after the quarter hour mark, a goal on his home debut, the build-up being supplied by Lewis Walker and Mo Bettamer, the ball played through by the Shots number 19 being inch-perfect to Tanner’s feet and he finished well. 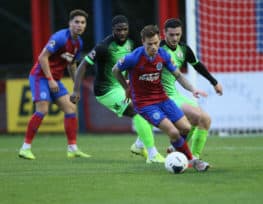 Mitch Walker saved twice from his namesake, Tom, before an even more spectacular save on the stroke of half-time saw an effort from Josh Keane heading for the top right-hand corner. Walker tipped it over the bar at full stretch to see his team into the dressing room in the lead at half-time. Jim Gannon’s words obviously had a strong effect in the 15-minute break and it didn’t take long before Stockport were level through Devante Rodney, a corner failing to be cleared by the Aldershot Town defence. But the Shots were not going to let this slip.

Eight minutes later, a cross from Lewis Kinsella was met by Bettamer and the East Bank and players erupted in delight, only for the linesman to initially flag the goal as offside. To chants of ‘VAR, VAR’ from the supporters, referee Richard Hulme consulted with the South Stand-based official, and then signalled that the goal indeed stood. After having stood around in concerned groups while the debate happened, on the whistle Bettamer beckoned his team mates to him to re-celebrate, as did the supporters. 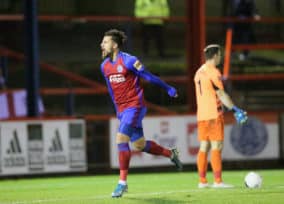 Bettamer was to have a further chance in the game but his header from another Kinsella cross went wide and when set up by Tanner, the Libyan also was unable to convert. No matter, the Shots saw the game out and it was a happy Christmas for Aldershot supporters who hadn’t had a win in the final game before 25 December since 2015.

Disappointingly they were unable to carry on the momentum into Boxing Day, the scheduled match away to Eastleigh called off in the morning of 26 December due to a waterlogged pitch. No matter, it meant that the players were fresh for the visit of Barnet to the EBB Stadium two days later and there was a desire from the players to reverse the defeat that they had suffered back in September at the Hive, along with Mo Bettamer looking forward to impressing his former manager, Darren Currie. The Bees were chasing down on the play-off places, with nine points from their previous three games but on a winter’s afternoon in Hampshire, were unable to break down a resolute Aldershot Town defence. 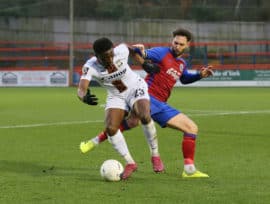 Dean Rance and Ethan Chislett tested Scott Loach early on in the first half and Mitch Walker did superbly well to keep out Simeon Akinola after the Barnet number 14 latched onto a Cheye Alexander cross. And Akinola thought he had scored five minutes into the second period but Walker’s punch from the initial shot bounced off Kodi Lyons-Foster and went out for a corner. Relief for the Shots Moments from the end there was huge drama and disappointment in equal measure when Chislett ran onto a ball from Bettamer but with the entire East Bank backing him to score, instead Chislett’s shot was smothered by Loach. It was the last kick of the game. As the players applauded the supporters at the end of the game, the sadness and frustration was plain to see in the former Met Police player’s eyes.

However, a point had been gained against a team on an excellent run and no goals conceded – it was a
reasonable afternoon’s work. 2019’s football was over but there was still plenty to come in 2020 – Danny
Searle was carrying out good work with these players and there were some special times about to
happen very soon…