After a pre-season of varying results, Aldershot Town embarked on their first season under new
manager Danny Searle, filled with hope and optimism for the nine months ahead.

Despite having actually been relegated at the end of the previous campaign, the Shots were still in the National League due to irregularities at Gateshead FC seeing that proud north-east club relegated in Aldershot Town’s place. Searle had only been at the EBB Stadium for a month and already had seen his club rise a division!

Despite this unexpected restoration, there were concerns amongst the fanbase that confusion over
which division the club was to play in would impact on recruitment. Clearly there were players who might
be willing to play in the top flight of non-league who wouldn’t yet see their career in a regional division,
but Searle was upbeat about this when he was introduced to the supporters at a Meet the Manager
evening in late May, a night when he won over everyone in a crowded EBB Lounge and explained how
he was already going about recruitment.

And once the announcement was made that the Shots had had their reprieve at the National League Conference on 8 June, it was clear that he had been diligent in his work. Established NL players such as Dean Rance, Mitch Walker, Kodi Lyons-Foster and Robbie Tinkler all arrived at the EBB and coupled with exciting young prospects like Ethan Chislett, Connor Shields and Alfy Whittingham, the supporters were prepared to begin to get a little bit excited and believe that despite Aldershot Town being the bookies’ top choice to go down, that the reprieve might be longer lived than one season.

It was a brutally busy start to the new season for what was pretty much a brand new squad, bar just five
players remaining from the 2018-19 relegation season group. Eight matches were played in August and
the players and new manager needed to get off to a flying start to help keep down any early rising panic
amongst supporters!

The opening day of the campaign was a home tie against AFC Fylde and there was hope that a smash and grab might be achieved against one of the teams predicted to be at least in the play-offs come season end. And there were times in the game, played in front of a 2,000-strong crowd, that it looked like this might be achieved. Fylde took the lead with a deflected goal but the home side were nothing if not persistent, applying pressure all over the park, both defensively and on the attack too.

Fylde doubled their lead through Danny Rowe and a penalty but there was late delight around the
ground when Connor Shields’ shot was turned into the Coasters’ net by keeper Byrne and the reception
for the home side was warm at the end of the game, Searle leading his players in applause to the
supporters.

Game two was the following Tuesday and couldn’t have been bigger – an away tie with newly-promoted
Woking. If ever there was a game in which players and management could wholly gain the love of the
fanbase it was this one. Nearly 1,000 Shots fans made the short trip over the border and were rewarded
with a tight 1:0 win, the goal coming from a newly rejuvenated Jacob Berkeley-Agyepong. It was a
significant moment for Searle who rightly took the applause from the away terrace after the match, and
provided a huge boost throughout the club. 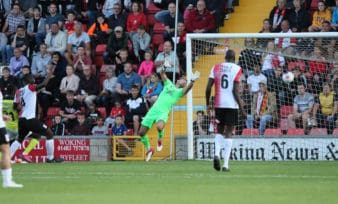 A trip to Solihull Moors four days later was less successful, with another 2:1 defeat, the Moors’ goals
coming from former Shots loanee Paul McCallum and a penalty, with Mitch Walker saving a second
penalty. This meant that the Shots had faced three penalties across their opening three games – and not
one for the red and blue. Ethan Chislett scored his first goal for Aldershot Town late on, the one bright
spot in the afternoon. With the matches being played at a rate of one every three or four days, the
following Tuesday evening saw Aldershot Town lose again, this time in front of their own fans to a
dogged Bromley side. It was a bad-tempered match at times, which saw Searle receive a yellow card
while goalkeeping coach Dave Blackmore’s was red and even worse, the home side didn’t even score,
losing to a Jack Holland header from a Bromley side which consistently dominated in the air for the full
90 minutes.

With the good mood which had been engendered by the win over Woking fast sliding away, it was
important that the Shots begin to pick up more results and points. The visit of FC Halifax Town on 17
August looked for a long time as if this would be the match to provide this. It was a fine performance and
there was nobody happier in the EBB Stadium than defender George Fowler who put his side ahead in
the first minute – Fowler had been out for over two-thirds of the previous campaign and was delighted to
be able to initially be playing once again – but a 1:0 lead is challenging to hold on to and although
Robbie Tinkler cleared off the line in the 80th minute, the resulting corner saw Binnom-Williams flatten the match.

It was hugely disappointing for the 1,500 Shots fans, players and management too. The following game was seven days away and there was great hope that a week’s break and the added spur of being on television, down at Torquay, would finally see another win. As it was, it turned out to be the poorest performance so far, the Shots losing 2:0 and also losing defender Alex Finney to injury, a big blow for the young player who had been enjoying a resurgence of form under the new manager. With it being the Bank Holiday, there was an immediate opportunity to redress this poor game with Sutton United the visitors to the EBB on August Bank Holiday and on what was the hottest day of the season so far, 1,600 football fans struggled to keep cool as they backed their teams. It was probably fair to say that for some supporters, keeping cool was almost impossible as Aldershot Town conceded in the 83rd minute to yet another penalty, this time scored by former Shot Jamie Collins, and went into time added on at the end of the game a goal down and looking down the barrel of a fifth defeat in seven games.

When Mitch Walker pumped a free-kick up the field towards the High Street End several supporters had
already left the ground in a hot-tempered rage and therefore missed Berkeley-Agyepong making the
most of a goalmouth scramble and snatching a point with almost the final kick of the game from Matt
Gray’s Sutton. With the mood around the ground, this late, late point almost felt like a win. 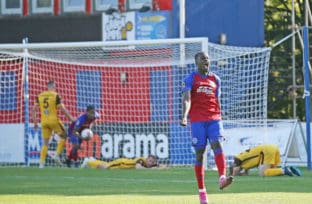 And so to the final game of the month and just over a year to the day that Gary Waddock had taken a
team to Ebbsfleet United and seen them knocked sideways in a 3:1 defeat, Searle and his players
arrived at Stonebridge Road to try and end the month on a high. In a fine afternoon for the Shots, Dean
Rance led his team mates against his former side in a game which saw goals from AJ Eyoma and Ethan
Chislett, one in each half and celebrations between supporters and players which paid tribute to the type
of approach Searle was utilising to build links between all aspects of the club. Even a late goal from the
home side couldn’t crush spirits and the Shots saw the game out strongly to the delight of the travelling
support. 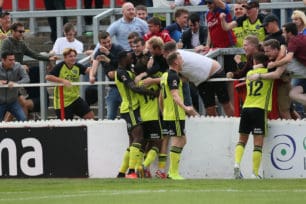 It was a good end to the first month of Danny Searle’s reign and with the last-gasp point from the
previous Monday along with this win, signposted the way to better things in the coming months. It was
looking like a good time to be a Shots supporter once again…